The Women's Caucus in International Studies is planning to sponsor a roundtable at ISA-New Orleans entitled Living Globalization: Female Academics at Home and Abroad. WCIS is particularly looking for female academics working in countries other than the one(s) in which they were born or raised. Particularly welcome are female academics working in/from Africa, East Asia or South America.

Here is the  proposed blurb for the roundtable:


International studies is an increasingly globally interconnected profession.  This trend includes a growing number of female faculty who take up positions in countries other than those in which they were born and/or raised.  This professional migration suggests a number of questions that have remained unexplored.

First, what is the status of female academics in comparative perspective?  What are the differences and similarities in the experiences of female academics in various countries around the world?  Although there have been numerous studies on the status of women in academia, much of it is US-focused or consists of single-country studies.  This panel will draw attention to comparison across societies.

This roundtable is an initial exploration of the intersection of “femaleness” and “foreignness” in the international studies profession.

Given the recent spate of works contesting mainstream IR, the GSCIS has decided to compile a bibliography of what members consider to be key books, articles, and projects dealing with global south (third world) international relations and foreign policy. This list should be particularly useful for graduate students, who often ask us for suggestions for reading lists. GSCIS member Kevin Funk (kevin.funk@gmail.com) is coordinating the compilation of this bibliography. Please be in touch with him if you would like to help! The more people who get involved, the better the list will be.


We hope that you are planning to participate in the Bangkok conference in January 2015. All GSCIS members are of course very special invitees. Regarding the political situation in Thailand, we are in regular contact with our colleagues there and we ask you to please check the blog continually for updates (as well as other news). As global south persons, we are all aware of the vicissitudes of politics in our areas of the world; our conferences will be useless without the ability to ensure the free flow of ideas. So rest assured that we are keeping on top of things.  The conference updates will be specifically uploaded to this link: http://gscis.blogspot.com/2014/05/preliminary-information-on-second.html. For other updates just click the usual blog link http://gscis.blogspot.com. We also request that you sign up to “follow” the blog as well as our facebook page (https://www.facebook.com/isa.gsc). It makes it simpler to keep well informed.

Dear Colleagues:
By now you will have received the Call for Proposals for Second Global South Caucus of International Studies Conference scheduled for Bangkok, January 2015. The ISA, the ISA President, and the GSCIS have for some time been monitoring the political situation in Thailand and, as a precaution, have been exploring alternative sites in case the conference needs to be moved. In view of the current military crackdown, which now includes the detention of politicians, scholars, and writers, we are urgently reviewing these alternative sites, and will be informing the membership of any venue changes in due course, certainly well before the registration deadlines.. Meanwhile, we wish to assure the ISA membership that the conference---focused as it is on the some of the most important issues and ideas about an inclusive IR —will be held as planned in January. The deadline for submission of proposals has not changed (July 15). Go to http://www.isanet.org/Conferences/GSCISBangkok2015/Submissions.aspx to submit. To keep up to date you may also wish to periodically check the GSCIS blog at http://gscis.blogspot.com/2014/05/preliminary-information-on-second.html and/or follow us on Facebook (https://www.facebook.com/isa.gsc). We thank you for your inquiries and enthusiastic responses to the Call for Proposals. We are convinced that this will be a seminal and very productive event for the GSCIS and the ISA, and we look forward to the traditional fruitful and free exchange of academic ideas at GSCIS 2015.

Post-Toronto
The GSCIS was well represented in Toronto, sponsoring or co-sponsoring some ten panels. Most of these were well-attended, in part, I believe, because we were hosted by such a multicultural city.


The GSCIS Distinguished Scholar luncheon is becoming quite a fixture and definitely is the highlight of our meetings. This year we must thank the Faculty Club of the University of Toronto for hosting us (and thanks very much to Prof. Thomas Tieku who helped us make the arrangements). We were treated to good food in a very civil and warm environment, despite the cold outside. Thanks go as well to ACUNS which once again helped fund the luncheon, and Routledge Publishers for the same reason. Tim Shaw did yeoman's duty as our volunteer greeter. Of course most of all we thank Prof. Arlene B. Tickner for her words of inspiration. The entire speech will be available in our summer newsletter. Here I reproduce only a small part of the four talking points contained in her speech entitled "On the paradoxes of writing from and about the Global South."


1. The largest paradox, or if you will, the “elephant in the room”, is me. As a white, American, English speaking and U.S. educated scholar, and independently of the potential merits of my scholarship, I sense that I am a recognizable and tolerable “other” with whom the global IR community can easily communicate. 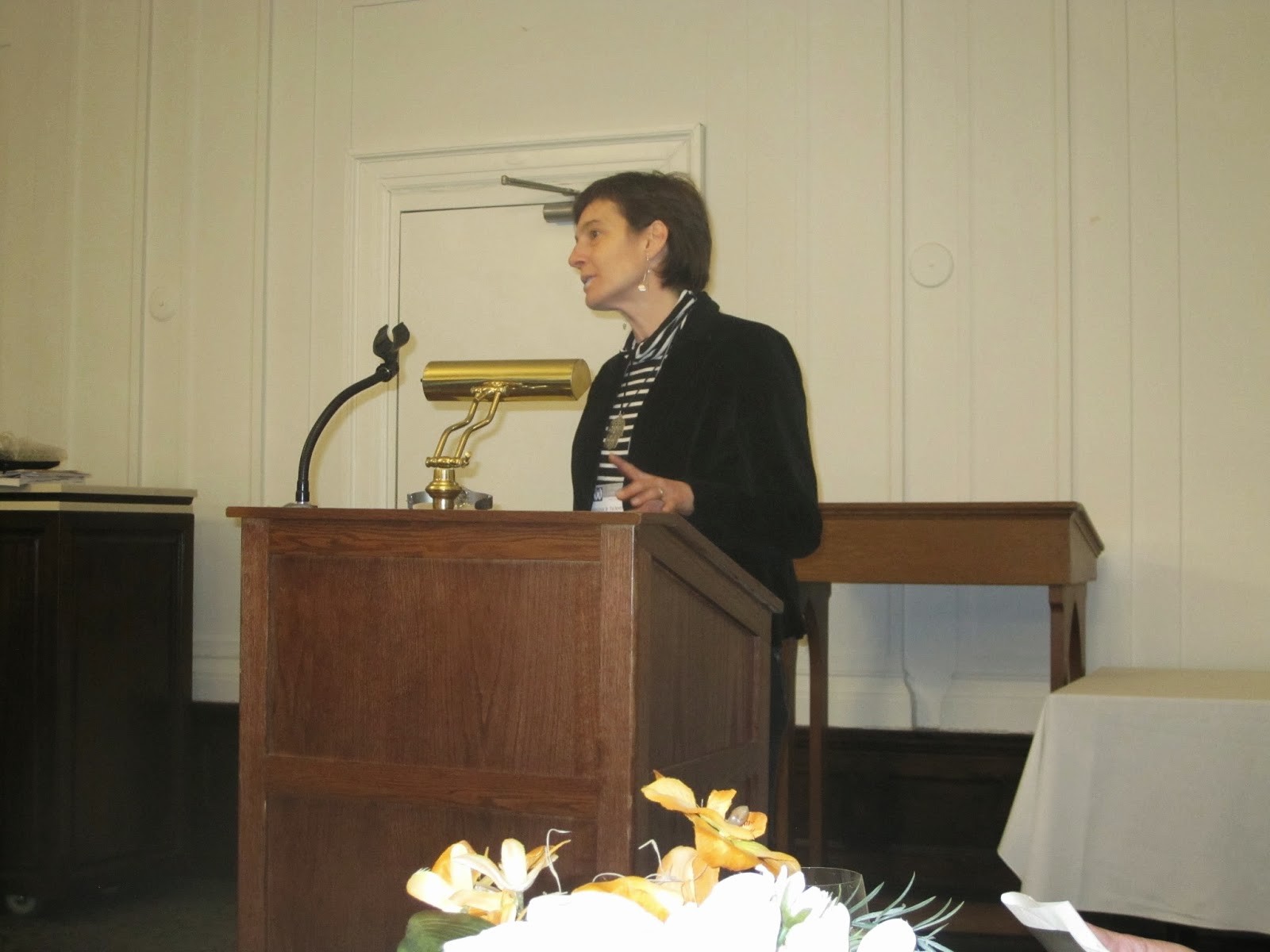 2. Notwithstanding the above paradox, I would argue that there is something to be said for “working in and thinking from” versus simply “being born in” the global South. Although some would say that in a globalized world, location has little import for the ways in which we know and problematize the world, I strongly believe that everyday life conditions mold scholarly practices in myriad and powerful ways.

Receiving Award from Chair of Caucus, J. Braveboy-Wagner
3. A third paradox has to do with the fact that the sources of academic recognition in many peripheral settings do not necessarily correspond to those of global IR. To begin with, theory is not only a dreaded enterprise, but also takes a back seat capital-wise to practical, applied knowledge susceptible to being translated into public policy formulae. Oftentimes, even consultancy research and media activities are more preferred outlets than theoretically based work.

4. Global knowledge networks in fields of study such as IR operate in such a way that transnationalized scholars trained in the United States or Europe, who are English language saavy and outward looking, are hard-pressed to give voice to local experience and know-how in ways different from their simple absorption or assimilation.

5 . Finally, establishing connections between scholars located within the global South without the mediation of the core is extremely difficult, given the deeply entrenched core-periphery logics that characterize IR and the social sciences in general.
In light of the above, perhaps one of the largest challenges faced by academics located in the global South and interested in carving out a potentially transformative niche for their scholarship, is the creation of direct and unmediated conversation and interaction. For this, projects such as the Global South Caucus constitute a promising beginning.

The GSCIS wishes to express its (belated) condolences to the family of Dr. Geeta Chowdhry. Geeta was listed as one of our senior advisors, was an active member of ISA, and friend/proactive and energetic professional colleague to many of us. She was a professor and former chair of the Department of Politics and International Affairs at Northern Arizona University. She died while in India with her family on Jan. 13, 2014 at the early age of 57.
For more information, go to http://news.nau.edu/obituary-geeta-chowdhry-political-science-professor-former-chair/#.U3vwYZwrxI0

The global south lost another important scholar when Dr. Norman Girvan passed away in Cuba on April 9. Although he was not a member of the caucus, he was one of the scholars we considered honoring this year in Toronto.  Dr. Girvan (a Jamaican whose last academic appointment was in Trinidad and Tobago) was a specialist in development, a committed regionalist, and an early promoter of global social and economic justice. He also held various policy positions at the UN and in the Caribbean. The United Nations issued this statement on his passing:


Statement Attributable to the Spokesperson for the Secretary-General on the death of Norman Girvan
The Secretary-General is deeply saddened by the death of Mr. Norman Girvan of Jamaica, who had been his Personal Representative on the Border Controversy Between Guyana and Venezuela since April 2010. He extends his heartfelt condolences to his family and to the governments and people of the Caribbean region.
Mr. Girvan was one of the most distinguished Caribbean scholars of his time. He was particularly devoted to the promotion of regional integration in the Caribbean and Latin America. This commitment earned him the respect and admiration of the entire region.
The Secretary-General is grateful for Mr. Girvan’s contribution to the United Nations good offices process between Guyana and Venezuela. The progress achieved during his tenure was acknowledged by the Heads of State of Guyana and Venezuela and is part of his impressive legacy.
New York, 10 April 2014.

Posted by J. Braveboy-Wagner at 4:00 PM No comments: