The Treasurer has reported that we have not reached the threshold of 15% of members voting in our election for officers. We will now have to embark on a second round of balloting.  If you have already voted, there is no need to. However, if you have not, please do so by June 15th.  The ballot is  available at
http://gscis.blogspot.com/2015/04/bios-of-candidates-and-ballot.html. You can check all of only selected boxes as you see fit. Send completed ballot to Seifuden Adem  adems@binghamton.edu. 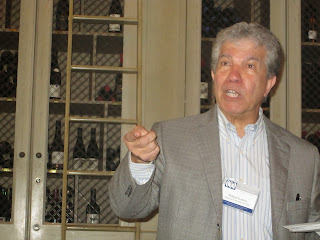 I want to thank you all for coming to this lunch honoring me. In addition to Caucus members who voted for me, my thanks go to the chair, Jacqueline, who surprised me with this news when I didn't even know that I was a candidate for this award. Very special thanks also to Tim Shaw who presented me so elegantly , ignoring all my vices he knew too well since our student days at Sussex University back in the 1960s.
Since we had to change to a bigger room without a microphone, I will be brief. I will emphasize three points:
I-In relation to the Global South, what does IR theory offer? What do hard data/content analysis of basic IR textbooks/handbooks tell us?
II-If we feel that the Global South has been marginalized and ignored, what can be done: Forget IR theory or fight back?
III-If  we fight back , how to win such a basic fight?

I-             IR theory and the Global South:What do hard data tell us?
These data come from two sets. The first group is based on 2001- Kim Nassal’s analysis of 14 widely-used textbooks, with many in their 4th or even 6th edition. They are then replicated by my content analysis data of two recent influential Handbooks by major publishers: Oxford Handbook of International relations (edited by Ch. Reus-Smit & D. Snidal) (2008), and Handbook of International Relations (edited by: W. Carlsnaes, Th. Risse & B. Simmons) (2013, 2nd edition). As we know , Handbooks are both influential syntheses of knowledge in the field and also visible signposts mapping the field's future, even directing it.
These two Handbooks are composed of 77 chapters, totaling 1649 pages, by 91 authors of the heavy weights in the field. Their research is impressive  as it is based on 7762 references.
Indeed , this number of references is truly impressive , at least quantitatively . Qualitatively, however ,these references tell a different story. Scratching beyond the surface shows that the field has not evolved beyond Hoffman’s characterization of IR almost 40 years ago as an "American Social Science”. Both textbooks and handbooks data show that IR suffers from the same epistemological, conceptual and methodological patterns . Here are some examples .
1-    Many authors still talk in the 1st person: essentially Americans talking to Americans, e.g. “our” foreign policy. If we take names off, there is no difficulty for any reader to know where authors come from and who their primary audience are .
2-    IR is represented as a discipline which only Americans - or Anglo-Saxons- contribute to. The discipline is shown as revolving around the U.S. , whereas  the world outside there is beyond the water's edge - as in Hoffman's 1977-article,i.e. ‘a relative zone of darkness’. When  sometimes references are made to this ‘relative zone of darkness’ , they include  factual errors.
3-    Despite the huge number of sources used, they are usually unilingual, mostly U.S. sources. If "foreigners" are cited, they are usually those who published in U.S. Journals or collaborated with U.S. institutions. IR  speaks English  , and principally with  an American accent.
4-    The discipline is not only American-centric, but tends to be worse: it verges on being incestuous. For instance, as even Katzenstein lamented , authors dealing with similar topics but publishing in different U.S. Journals, e.g. Journal of Conflict Resolution vs International Security - rarely quote each other. Thus U.S. academic tribes and cartels and their mutual neglect/narrow debate are bought in this supposedly-universal field. Any potential breadth of vision is sacrificed.
No wonder that the cold war was described as the period of the “long peace”, when the longest war in the post-1945 period , the Iran-Iraq 1980-1988, was taking place. Moreover, IR was busy splitting hairs between Neo-Realism/Neo-Liberalism and their different branches when the Berlin Wall was falling and the USSR was collapsing.
II-What is to be done ?

If IR theory is that high realm of  irrelevance and neglect for the Global South, even failing in its mission as a universal discipline  (becoming  that “ higher bullshit”  as Rosenberg put it unkindly in 2007 ), what to  do about it? As Lenin put it in a different context: what is to be done? At least two options deserve discussion:
A-   Forget about IR theory, as it is beyond saving. After all, even major IR theory contributions from the Global South (from Acharya to Bilgin, Braveboy-Wagner, Tickner or Shaw) are marginalized or even altogether ignored.
But I feel this could be the easy way-out . It is also a self-defeating one. Indeed  it is harmful both for the Global South and even the IR field itself. The field has to be claimed back to emphasize its original universal mission. It cannot be left to continue as parochial ,incestuous and even anachronistic . We have a role, and indeed, a responsibility to carry out a re-orientation in this respect.

B-   Fight back to recover ownership of the discipline for all, not only for our own sake but for the sake of the discipline and to make it as universal as it is supposed to be. My example here is Robert Cox, my former professor, and quite a few colleagues working in the field of critical theory.

III-Operationally, what are the steps ?
A- If we are not an ISA formal section such as FPA, we should be or coordinate/combine force with other sections such as Global Development . We should collect section fees and publish our newsletter.
B- In addition to  institutionalizing our networking, we should enlarge our membership especially  through younger scholars; explore ways of offering grants to bring more people from the Global South to the ISA ,perhaps contact some fund-providing institutions  , outside and within the Global South ,e.g. within the Gulf region , or in collaboration with its  different programs at Sciences Po. in Paris , or LSE in London..
C)Add to publications  that deal with our issues, such as Third World Quarterly , add also to different series with major publishers , e.g.Palgrave-Macmillan ; Routledge…; making up for topics that are still marginalized by mainstream and dominant IRT: impact of issues such as Development , Post-colonial identity , religion….. The objective is to make IR less of another dismal science and analyze world order from below, bottom up.
D)We can win for we have two important resources
i- Human/intellectual capital
ii-  We are working on the ground  , constantly engaged in field-work
(sustained field experience is what saved Development  Studies and some aspects of Comparative Politics from liabilities that iarebringing  the misery to the state of IR).

So let us fight back and recover ownership of our discipline, for the sake of a universal discipline as well as our own sake. It is a strategy of  win-win.

Bahgat Korany
Next blog post:URGENT: PLEASE VOTE, 15% THRESHOLD NOT REACHED
Posted by J. Braveboy-Wagner at 9:35 AM No comments:


You will have received a notice from ISA requesting that you vote for an amendment to the constitution that would substantially increase the number of members needed to approve a new section. The GSCIS executive met in both Toronto and New Orleans to discuss the issue of moving to a section. The move will allow us to support more panels at meetings, among other benefits. This year, after further consultation, we decided that we wanted to maintain the caucus for networking purposes IN ADDITION to asking for a section – similar to the women’s caucus/FTGS arrangement. We are still discussing this and will update you via the blog. In the meantime, the call for a constitutional amendment has caught us off guard. We ask you to please vote DOWN the constitutional amendment as this would make it more difficult for us to form a section.

This is a reminder that the deadline for submission of paper and panel proposals to the Atlanta conference is coming up - June 1st! Please submit your proposals online at isanet.org soon. The theme of the conference is: Exploring Peace. For more see: http://www.isanet.org/Conferences/Atlanta-2016/Call.

The theme fits in very nicely with the caucus' consistent focus on security, foreign policy, regional and development issues affecting the south, so we look forward to receiving a variety of interesting proposals.

We've been giving you a little break from the bombardment of emails but will soon provide you with the results of the recent election of officers and also ask you to nominate a distinguished scholar honoree, among other things. In addition we have not stopped working! We are currently trying to assess potential hosts for workshops  and for our next conference which we know everyone is eagerly looking forward to! For now, we all need to focus on having good representation at ISA-Atlanta.

The Editors of Contexto Internacional: journal of global connections invite proposals for Special Issues for the year 2016. Editors welcome proposals that promote and encourage the development of International Relations (IR), with a particular scope in the dynamics and challenges experienced within and around the Global South. Submissions that contribute to an understanding of the plurality of perspectives present in the field of IR and that advance our understanding of the connections between situated knowledges and global affairs are therefore preferred. Up to two special issues will be published in 2016.
Contexto Internacional is one of the leading journals in international relations within Brazil. Submissions in English, French, Portuguese and Spanish are accepted. Contexto is published in English three times a year.
Proposals will be reviewed in the language of submission. If the review process results in a decision to publish, it is the responsibility of the author alone to translate the article into English. All contributions are submitted to double blind peer review and are rigorously evaluated by experts.
Normally, a special issue includes 5-7 research articles speaking to a common theme / set of questions. The articles are selected through an open call for contributions. The articles should follow the standard guidelines for submissions and will be subjected to the same blind peer review process as normal articles. In collaboration with the Contexto editorial team, the Guest Editor(s) will formulate the call for papers and select the articles to be peer reviewed, oversee the review process, and be involved in finalizing the editorial. The total length of the proposal should not exceed 4000 words.
Proposal for special issues must include: 1. Title of Special Issue, 2.Name, affiliation, contact details, and short bio of Guest Editor(s),3. Brief statement about the issue theme, 4. A rationale justifying the proposal, 5. Titles, abstracts, and five keywords of any article the Guest Editor would like to include and 6. Names, affiliation, and contact details of each contributor.
Proposals for special issues are to be submitted by May 15, 2015.
Acceptance decisions will be announced in June 2015.
Proposals and correspondence should be directed to Carolina Moulin,
Editor: contextointernacional@puc-rio.br
For more information about Contexto Internacional, consult the journal’s webpage: http://contextointernacional.iri.puc-rio.br
Individual research articles as well as review essays can be submitted on a continuous basis. See our instructions for authors at: http://contextointernacional.iri.puc-rio.br
Carolina Moulin, IRI/PUC-Rio (Editor)
Alina Sajed, McMaster University (Associate Editor)
Anna Leander, Copenhagen Business School and IRI/PUC-Rio (Associate Editor)
Roberto Yamato, IRI/PUC-Rio (Associate Editor)
Posted by J. Braveboy-Wagner at 2:25 PM No comments:

We would like to extend our sympathies to our Nepalese members who have experienced a terrible earthquake. Sadly, the death toll has risen to almost 8,000 at this time. We encourage all our members to donate to the country's reconstruction. The Nepalese are a resilient people and we have no doubt that they will overcome this tragedy.


GSCIS executive
Posted by J. Braveboy-Wagner at 11:35 AM No comments: