News from ACUNS, Our partner

This is a special fund-raiser organized by Friends of ACUNS, which will help to support future Travel Awards, Book Awards, the Gene Lyons Award, and any similar future Friends of ACUNS programs.

Purchase Tickets:
You can purchase tickets for the Friends of ACUNS dinner online.

About Kenneth Roth:
Kenneth Roth is the executive director of Human Rights Watch, one of the world’s leading international human rights organizations, which operates in more than 90 countries. Prior to joining Human Rights Watch in 1987, Roth served as a federal prosecutor in New York and for the Iran-Contra investigation in Washington, DC. A graduate of Yale Law School and Brown University, Roth has conducted numerous human rights investigations and missions around the world. He has written extensively on a wide range of human rights abuses, devoting special attention to issues of international justice, counterterrorism, the foreign policies of the major powers, and the work of the United Nations.
About Ramesh Thakur
Ramesh Thakur is Director of the Centre for Nuclear Non-Proliferation and Disarmament and Professor in the Crawford School of Public Policy, Australian National University. He was formerly Senior Vice Rector of the UN University and United Nations Assistant Secretary-General. Educated in India and Canada, he has held fulltime academic appointments in Australia, Canada, Fiji and New Zealand and been a consultant/adviser to the Australian and New Zealand governments on international security. He was a Commissioner and a principal author of The Responsibility to Protect and the Principal Writer of Secretary-General Kofi Annan’s second reform report.
The author/editor of 50 books and 400 articles and book chapters, Dr. Thakur is also a regular media commentator, serves on the international advisory boards of institutes in Africa, Asia, Europe and North America, and is the Editor-in-Chief of Global Governance. His books include The United Nations, Peace and Security: From Collective Security to the Responsibility to Protect (Cambridge University Press, 2006); Global Governance and the UN: An Unfinished Journey (Indiana University Press, 2010); The Responsibility to Protect: Norms, Laws and the Use of Force in International Politics (Routledge, 2011); The Group of Twenty (G20) (Routledge, 2013); The Oxford Handbook of Modern Diplomacy (Oxford University Press, 2013); and Theorising the Responsibility to Protect (Cambridge University Press, 2015).

ACUNS publishes online peer-reviewed book reviews on books relating to the study of the United Nations, international organization(s) and topics in global governance. We have a list of Books Available for Review[acuns.us7.list-manage.com] on our website; if you are interested in writing a review on a recent publication that is not listed, you may contact the book review editor, Anastasia Ufimtseva (bookeditor@acuns.org)
Posted by J. Braveboy-Wagner at 11:24 AM No comments:

Here is a message from the President of ISA. Please note that the caucus will be sending out a more specific call for participation in the task force committees soon.


Dear Colleagues:
The Governing Council of the International Studies Association (ISA) at its meeting in Atlanta on March 15, 2016 approved the setting up of a presidential taskforce on the Global South (please see the attachment). The taskforce will be constructed in collaboration with the Global South Caucus (GSCIS) and it will supplement the useful work the Caucus has been performing for the past several years. The main purpose of this taskforce is to find ways by which members from the concerned regions and countries can improve their participation in ISA activities such as conferences, governance, and publication venues, in particular, the various ISA journals. The participation from Global South countries in these areas at present is very minimal.
We are writing to ask your opinion on the issues (as listed below), and possible solutions and mechanisms to implement them in a timely manner. We will pass your suggestions on to the taskforce once it is formed. In addition, please let us know if you can think of names of individuals, especially from underrepresented regions for possible membership in the taskforce. These individuals should have knowledge and understanding of the issues, some past ISA involvement, and can offer concrete solutions.  For your information, the following are the set of issues that we have identified for beginning the deliberations.

Short-term/Medium-term Issues:
1.     Greater number of participants from GS countries at ISA annual and other conferences organized by sections, regions, caucuses and affiliated organizations.
2.     Travel grants, generating travel resources through other sources, e.g., endowments, private donors; national and international; regional groupings.
3.     Improving journal submission and acceptance rates for scholars from the Global South.
4.     Training programs by ISA and affiliated sections/caucuses, including using existing training programs (e.g. OUP’s programs).
5.     Improving representation in governing bodies.
6.     Other issues to be identified by the Taskforce membership.
Longer-term Issues:
1.     Achieving greater cooperation among Northern and Southern scholars. Publishing in Southern journals and through Southern presses; joint publications- What can ISA do to promote this type of interaction?
2.     Scholarship, paradigms, pedagogy etc.  How to frame and engage beyond one or two dominant paradigms such as post-colonialism or critical theories.
3.     How to draw in more scholars who work on Global South issues within and beyond ISA memberships and Caucuses.
4.     Bridging language barriers.
5.     Providing greater networking opportunities.
6.     How to make ISA more globally-oriented, e.g. by seeking more affiliations.

We are also attaching a report that Lembe Tiky (chair), Aigul Kulnazarova (co-chair), and Kristina Hinds Harrison (rapporteur) prepared  on the basis of the deliberations at the Global South dialogue session that was held at the  Atlanta meeting in March. The report contains many useful ideas which will be shared with the task force. A special thanks to all who participated in the Dialogue.
We thank you for your support and advice for this important initiative. A response by May 30, 2016  is much appreciated. Please respond to this email address: gs_taskforce@isanet.org
Sincerely,
T.V. Paul,  ISA President (2016-17)
Nanette Svenson, Chair, Global South Caucus (2016-17)


Relevant links to the discussion about Diversity::
http://duckofminerva.com/2016/03/gender-rank-and-ir-missing-role-models.html

http://www.nytimes.com/2016/05/11/opinion/if-philosophy-wont-diversify-lets-call-it-what-it-really-is.html?_r=1[nytimes.com]
Roger McGInty, "Changing the ISA- From the Bottom-up" https://rogermacginty.com/2016/04/

Revving Up, Winding Down: Strategies for Late Career Moves.

Whether you are senior or junior at this stage, the panel "Revving Up, Winding Down:  Strategies for Late Career Moves"  held in Atlanta, had something to say to you as part of the mentoring of younger scholars to which GSCIS is committed .
Participants were:

The following chart was put together by Margaret Karns:

*Jacquie's BA was from a global south institution in a department where there were two female professors. 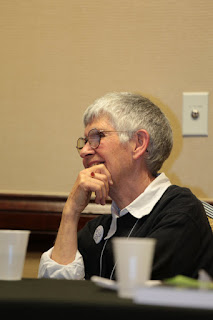 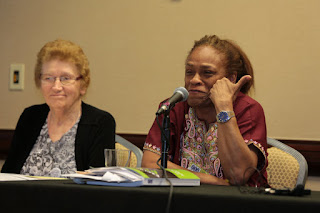 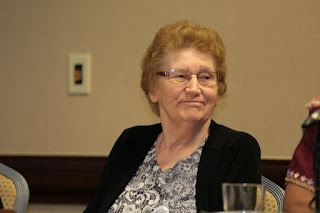