This is an open call for paper proposals for a Presidential Panel on the many different conceptualizations of peace in the global south (peace as absence of war/conflict management, peace as development etc). We will select four of the most innovative and geographically representative proposals from your submissions. For more information on the theme of the Atlanta conference, see www.isanet.org. Your proposals (just a paragraph, along with your name and affiliation) should be sent in by March 30th. We know that this does not give you much time and we do apologize but we have decided rather belatedly to give everyone a chance to participate rather than the usual process of designating a handful of senior people to present at such panels. Of course, we also take this opportunity to remind you that the deadline for other proposals for ISA 2016 is June 1st.


Send proposals to jbraveboy-wagner@gc.cuny.edu.Thank you.
Posted by J. Braveboy-Wagner at 10:45 AM No comments:

Dear Members:
The New Orleans conference was a success. We sponsored/co-sponsored/were involved in putting together some 13 panels and roundtables,  including  roundtables on indigenous affairs, on female mentoring and females in academia, and our own publication-oriented roundtable on diplomatic strategies of leading global south nations. Panels ranged from security to foreign policy, from IPE to the UN (the Chair  participated in a Presidential Panel on UN and Development), from African affairs to peace and development. We continue to expand out cooperation with sections and we are convinced that we are having an impact on ISA as a whole. Our membership continues to rise and our finances are in good shape, thanks to our two conferences so far.

As usual tour highlighted event was the Distinguished Scholar Honoree luncheon. This year we were oversubscribed in terms of attendance, forcing us to move at the last moment to a larger restaurant room and as a result, to make do without a microphone. However, our popular honoree, Bahgat Korany, took this is stride and with good humor. He was a wonderful guest and we will, as per usual, carry his remarks in the next newsletter and on this blog as soon as we can.
(Meanwhile, it is not too soon to start thinking about our next honoree, from Asia this time according to our rotation requirements). In addition to Prof. Korany, we were so pleased to honor a distinguished scholar, Jim Mittelman, who has been a good friend of the caucus from the beginning, and who is also, we understand, retiring from his post at American University soon. Jim's remarks will also be published soon.
We also want to thank Prof. Tim Shaw, another great friend of the caucus, who "emceed" the proceedings. Thank you Jim!
jbw 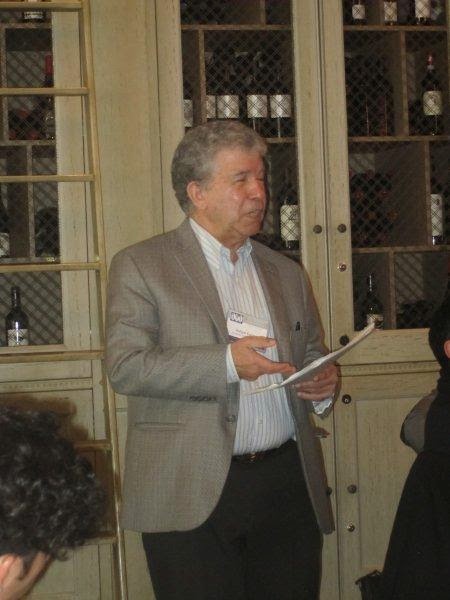 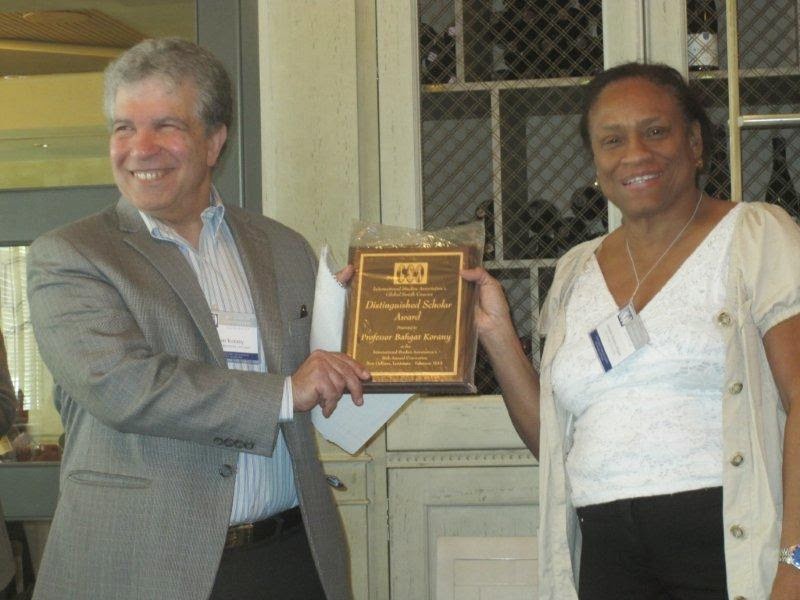 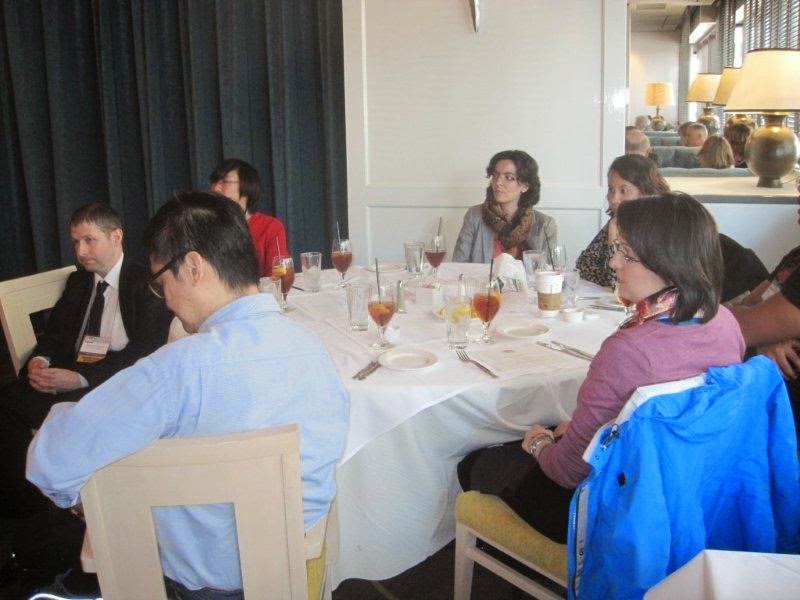 In cooperation with IPE which Honored Activist Angela Davis
_ 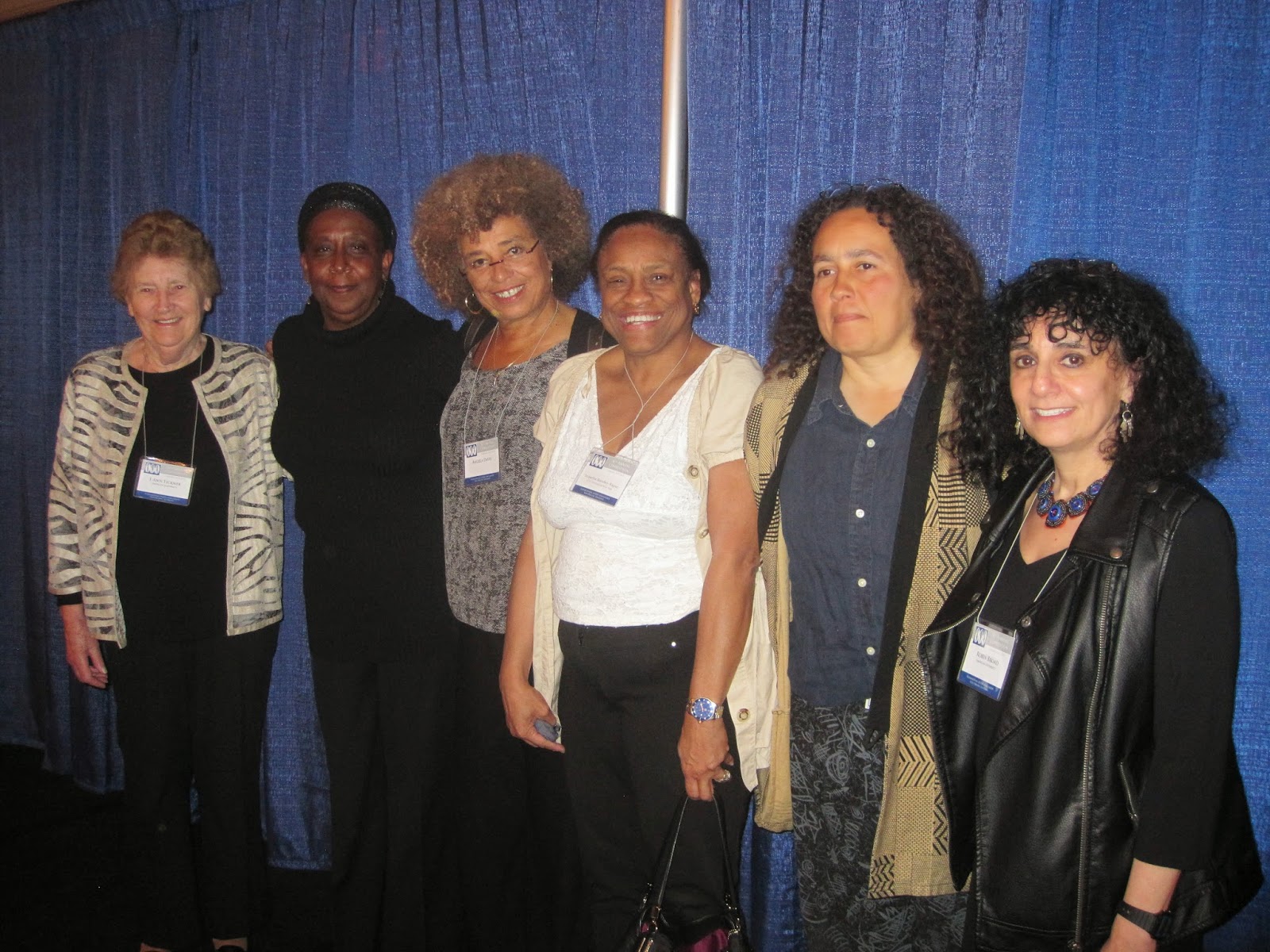 SPECIAL NOTES:
Elections: A call has gone out for nominations for relevant posts. Click here: http://gscis.blogspot.com/2015/03/important-elections-call-for-interested.html

New: BIOS OF CANDIDATES AND BALLOT HERE :http://gscis.blogspot.com/2015/04/bios-of-candidates-and-ballot.html
Many thanks to outgoing vice chair Lisa Richey and to African representative Hassan Ahmed for their great service to the caucus. We are happy that they will continue to work with us on special committees.

Dear Colleagues:
NOMINATIONS SOLICITED:
In keeping with our charter which calls for elections either before the annual convention or within 30 days of the convention, the Nominations Committee of the GSCIS alerts you to the following:

Note that the slot for East and Southeast Asia and the Pacific is currently occupied by Alan Chong, who is serving two years (2014-2016)
Both the Newsletter Editor and the Treasurer, who serve ex-officio  on the Executive Committee, are currently serving the last year of a second two-year term. (Terms end 2016).
The Secretary slot has been unoccupied for a year. The Nominations Committee has agreed to nominate Mariana Kalil for the position on the basis of her familiarity with the caucus as well as her present status as informal communications person.
Head of Initiatives:
The Nominating Committee agreed to ask Jason Strakes to remain as head of the Developing Eurasia Initiative for one more year (he has headed it since 2011) while we search for a new head. The Africa Initiative has been headed by Eric Degila since 2013, renewed annually. The committee agreed to ask members to endorse another year for Eric. (Note: all these positions are usually non-renewable unless the Nominating Committee and Executive Committee finds that extraordinary circumstances prevail.)

If you would like to serve the caucus, or would like to nominate someone, please write to the Chair ASAP at
jbraveboy-wagner@gc.cuny.edu. The Chair will forward your nomination to the Nominations Committee composed this time of EXCOM members who are not running for election this year.

Note:
Nominating Committee of the GSCIS met in New Orleans and endorsed the following persons for (Co-)Chair and Vice Chair:
Nanette Svenson, currently serving as Vice Chair, for Co-Chair(the current chair has been asked by the Nominating and Executive Committees to remain in a transitional capacity for another year and has so agreed)
Imad Mansour, currently Middle East representative, as Vice Chair.

However, members can also nominate appropriate persons for these positions. Send nominations to jbraveboy-wagner@gc.cuny.edu.

Please respond by March 30th. Please send bios of candidates when you respond. The election slate, their bios, and balloting process will be sent out soon after.

In nominating persons, please take note of the following sections of the Charter of the GSCIS
(Amended Charter as of March 2015: for full charter click here)

Executive Committee
5a. The Executive Committee shall consist of all current officers (as in Article IV.1), the immediate past chair of GSCIS serving ex-officio, and five (5) at-large members representing the following areas:
i) Latin America and the Caribbean; ii) South and Southeast Asia and the Pacific; iii) Africa; iv) Middle East/North Africa; v) developing Eurasia and/or North-South. The designation ‘North-South” refers to scholars working on issues linking North America and Europe with the global south.
5b. In so far as is possible, the Caucus shall endeavor to rotate the at-large membership among the various sub-regions of the broader regions of the global south.
6. At-large members shall serve a non-renewable term of two (2) years unless the Executive Committee votes, under extraordinary circumstances, to extend these terms for no more than two additional years.  However, three at-large members will initially serve a one-year term (renewable for another year by election), in order to allow for rotating terms and the maintenance of institutional memory.
7.  The duties of the officers and Committee shall be:
a) Chair: To serve as spokesperson for the Global South Caucus; to make arrangements for and preside at the annual meeting; to serve as liaison between the Caucus and the ISA; to propose initiatives that will further the goals of the Caucus; to select members of and chair the nominating committee; to propose other special committees and tasks. (Special committee members will serve for one year, renewable in exceptional circumstances).
b) Vice-Chair: To assist the Chair in carrying out the duties above. In addition, the Vice Chair is responsible for organizing, with input from the Chair, caucus representation on the annual ISA Convention Program. The Vice Chair can serve as Chair in the absence of the Chair.
c) Secretary/Communications Manager: To maintain accurate records of meetings and relevant correspondence; to promote, in cooperation with the Chair, Vice Chair, and Newsletter Editor, the activities of the caucus via all appropriate media channels.
d) Treasurer: to handle the financial affairs of the organization under the direction of the Chair.
e) Newsletter Editor: to produce a newsletter, normally three times a year.
d)  Executive Committee:  To propose, debate and vote on initiatives in support of the Caucus’s mission; to assist with arrangements for the annual meeting; to set membership dues; to compose and fill vacancies on any committees constituted by the Caucus; to perform other tasks that the membership, assembled at the annual meeting, recommends or that the Committee itself initiates.

8. All terms of office normally end at the annual ISA Convention at which the Caucus will also hold its annual business meeting. A meeting of the Executive Committee shall precede the annual meeting.

10.  Quorum and decisions: Five (5) members of the Committee, including the Chair (if absent, the Vice Chair presiding) shall constitute a quorum at Committee meetings. Committee meetings may be held electronically. Committee decisions shall be adopted by a simple majority.
11. Vacancies occurring between elections in all elected offices, except the office of the Chair, shall be filled by action of the Executive Committee, and only for the completion of the term of the retiring officer. In the event of a vacancy in the office of Chair, the Vice Chair shall become chair.
ARTICLE V: ANNUAL MEETING
The annual (business) meeting shall coincide with the annual meeting of the International Studies Association, This meeting shall conduct the ordinary business of the GSCIS.
ARTICLE VI: NOMINATIONS AND ELECTIONS

The Executive Committee serves as the nominating committee for committees other than itself. For membership of the Executive Committee, a nominating committee composed of three to five members of the Global South Caucus chosen by the Chair shall nominate candidates. Self-nominations are encouraged. The Chair and Vice Chair may also submit their own nominations to the committee.
The Vice Chair is eligible to serve as Chair as is any member who is deemed to have played a sufficiently active role in the caucus.
Candidates nominated should meet the required criteria of geographic and disciplinary diversity. The committee should take into account the contributions of nominees to the Caucus and the ISA.
Bios of prospective candidates shall be e-mailed to members before the annual election (which normally coincides with the annual business meeting) or before any by-election. Ballots shall be returned by e-mail within a specified period of time. New officers shall normally be presented to the membership at the annual meeting.
In extraordinary circumstances, elections may take place no more than thirty (30) days after the annual meeting. In such a case, the terms of members of the EXCOM will expire with new elections rather than at the annual meeting.

ARTICLE VII: AMENDMENTS
Proposals to amend this charter may be submitted in writing by any member to the Executive Committee which shall, in turn, vote on the proposal. If a simple majority of the Executive Committee approves the amendments, they shall then be submitted to the membership by email (or any other appropriate method). Proposals will be adopted if approved by 2/3rds of the members present at the next annual business meeting.

Amendments duly circulated and approved as of  March 31, 2015.

Posted by J. Braveboy-Wagner at 2:42 PM No comments:

Singapore Photos: Thank You for Making the Conference a Success 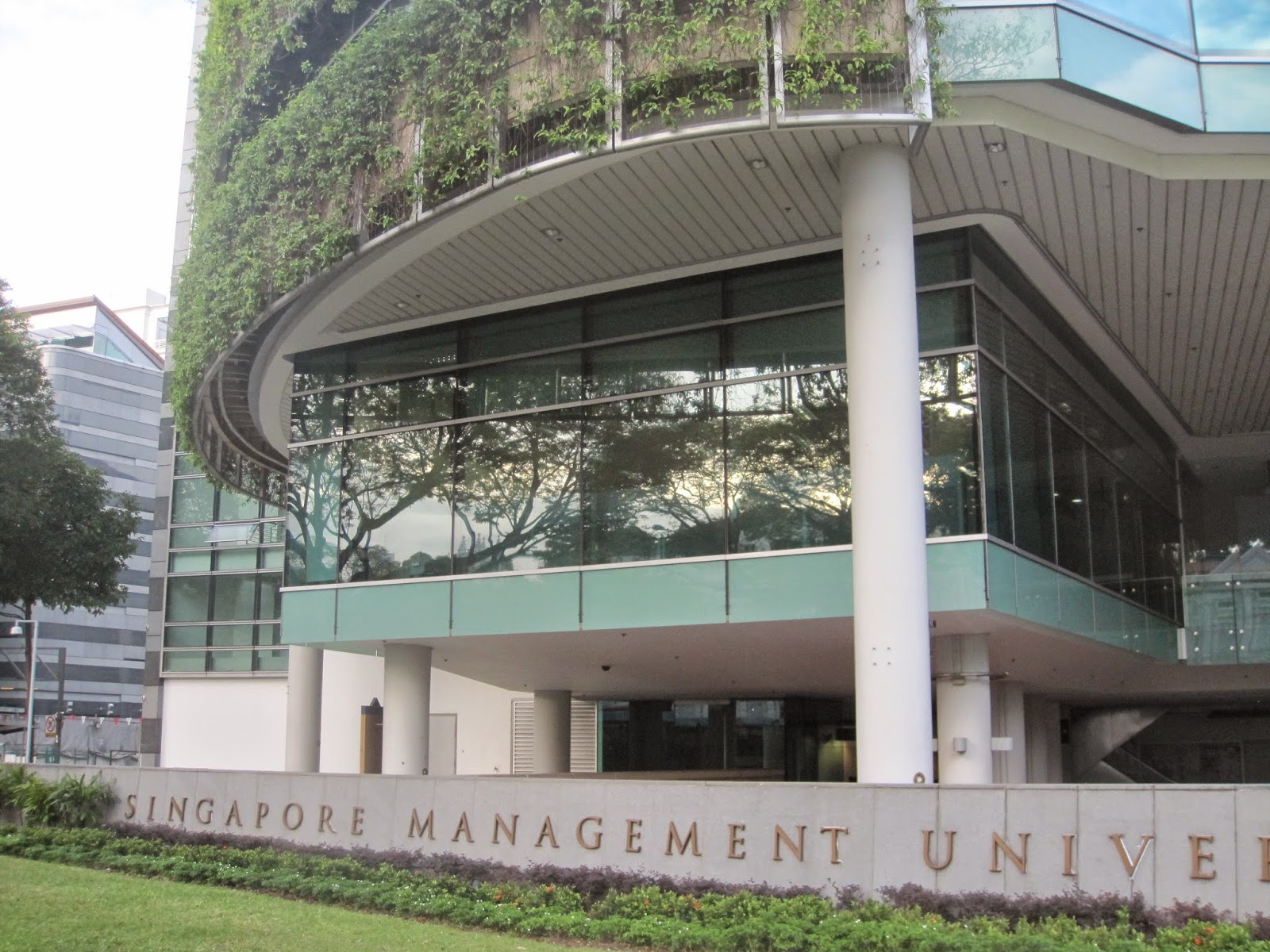 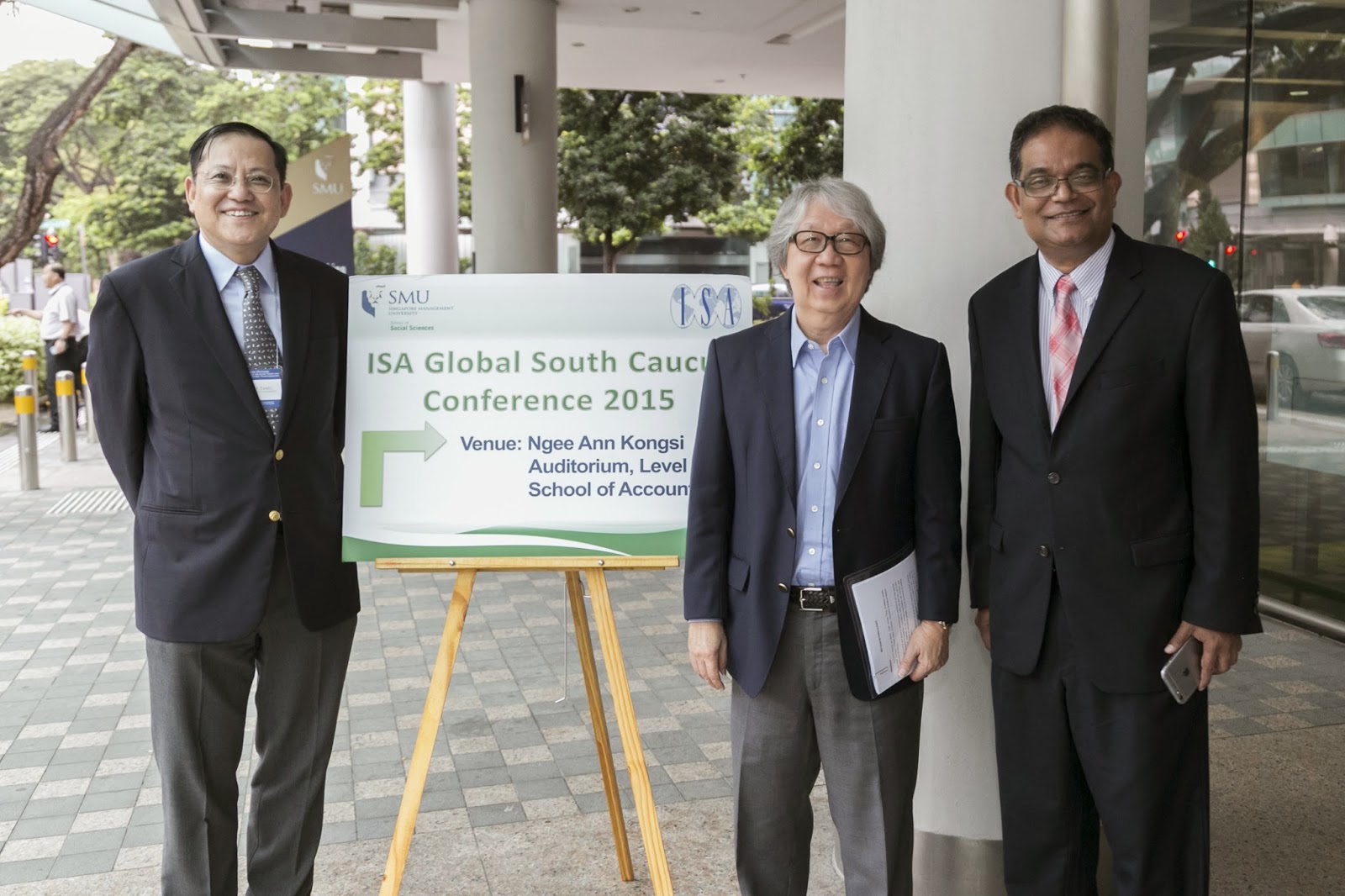 At Opening Ceremony and SMU Roundtable on Regionalism