Dear All:
At the annual convention in Toronto (March 27-30), the following new officers were inaugurated:


Congratulations to all!
Please send your news and photos to these new officers. The GSCIS plans to continue to develop its presence on social media as well as continue to maintain a limited presence on this blog. 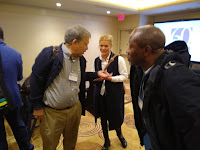 Going forward, plans are underway for a general review of the operations of the caucus and VC Jason Strakes is preparing a renewed Mission and Vision Statement for the caucus as it moves toward its ninth and tenth years.